This is a re-edit of my first The Movies film uploaded to TMU, a silent film titled "Letting Go", which was made originally to be a test of TM, before even getting the Stunts and Effects expansion. But, I still think it's a pretty good, while brief, emotional story told fairly well through visuals and sounds. Let me know what you think!

I have another old film, a post-war film titled "Flashbacks", that I will soon re-edit and re-post on TMU. It's another silent film...
I seem to really like doing those, don't I? :P 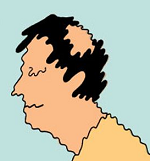 I have my feelings I've already seen this.

This particular way to introduce your film in just three shots looks just professional. I enjoyed very much the introduction and conclusion, they're simple, quiet, just great. Congratulations. Also the video quality looks gorgeus, and fits well with the external sound edition, but I think this mixing with TM sounds (for example when he's crying) may be a wrong decission, or perhaps I'm used to this sound and therefore I dislike it

Regarding to the phantom and the story itself, I dislike the idea to use casual clothes. Well I expected you'd use the ghost costum, but I know there's only one sample and maybe is not that good. Just to let you know it may seem rare that you see the ghost flying but at the bathroom is staying on the floor with no sign of "lifeless". Maybe we better conclude it's not real by the way you tell the story instead of that ghost scene.

At the same time, I like the way you compensate some in game limitations with that last scene. Great technique, I always like to see how someone creativealy tries with The Movies.